“Hopped off a plane at LAX with a dream and my cardigan…” – pretty much the best song to listen to as you get off the plane at LAX.

First thing I did after getting off the plane was walk to In-N-Out from the airport to meet Emily and Kevin. Probably not the best idea as it was a 25 minute walk with my carry on but it was a great way to stretch my legs after a long flight.

Even though I’m not a HUGE fan of In-N-Out, it’s a tradition for me to have it at least once whenever I’m in California. Nothing better than a double cheese burger after a 6 hour flight. 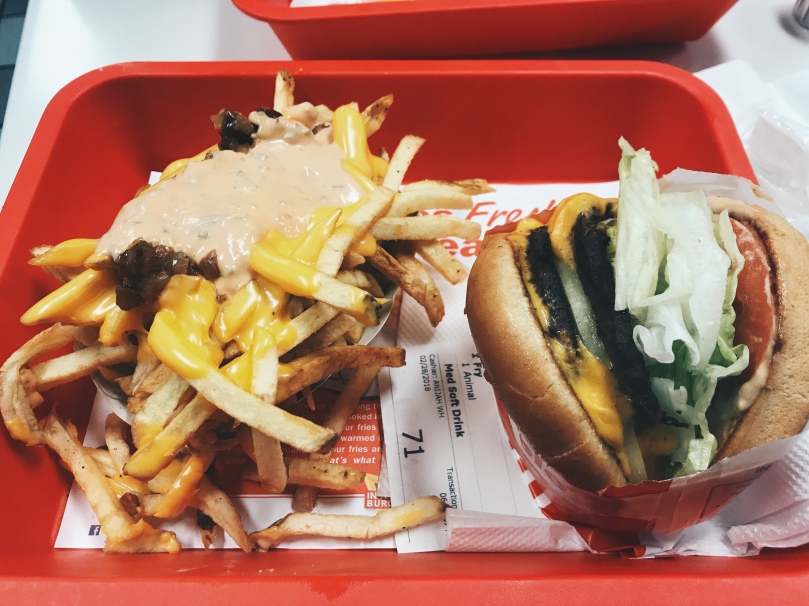 Afterwards we took a Lyft to our AirBnb to drop off our stuff and took a quick stroll around the neighborhood. We’re staying in convenient spot since The Grove is within walking distance and there’s a Trader Joe’s nearby.

Since we had to wait for Gavin to Christine and land, we did some grocery shopping at Trader Joe’s. We didn’t do much exploring around West 3rd since it most shops were closing but we’ll be back! (I’ll save the pictures until then.)

Brandy picked them up at the airport when they landed and we went to eat dinner at Song Nong Dan at KTown.

We got their popular dish the Galbi Jjim and it was freaking amazing. Definitely recommend this spot if you’re into authentic Korean food.

What was crazy is that we ended up seeing this group of Twitch streamers from OfflineTV eating there as we were leaving. What a crazy coincidence, since I was just talking about how crazy it would be if we ran into them in LA. I was too star struck to say hello and I didn’t want to be rude since they were eating.

It was a little past midnight after we got back from dinner and we were going sleep early to get ready for an early day of activities, but we all know that never happens.