After breakfast, we took the train to Omote-Sando Station for the Nezu Museum. The walk from the station to the museum felt like walking through Beverly Hills (minus the palm trees). One luxury store after the other. Everyone was well dressed as well.

I heard of Nezu Museum from an Instagrammer I followed. He was actually in Japan two weeks before our trip. The entrance of the museum was very instagramable.

Nezu Museum houses a collection of pre-modern Japanese and East Asian art. My favorite exhibit was the “Pinnacle of Elegance: Sword Fittings of the Mitsumura Collection”. The exhibit consisted of swords that were made in the 1700-1800s and they were beautiful. It’s crazy how detailed the swords were. Imagine how much skill and labor it took to make these swords. Unfortunately the museum doesn’t allow photographs inside their exhibits or else I would’ve shared it here. Aside from the exhibits where I couldn’t get a nice picture, the lobby and garden was enough for me.

One of the areas in the museum. 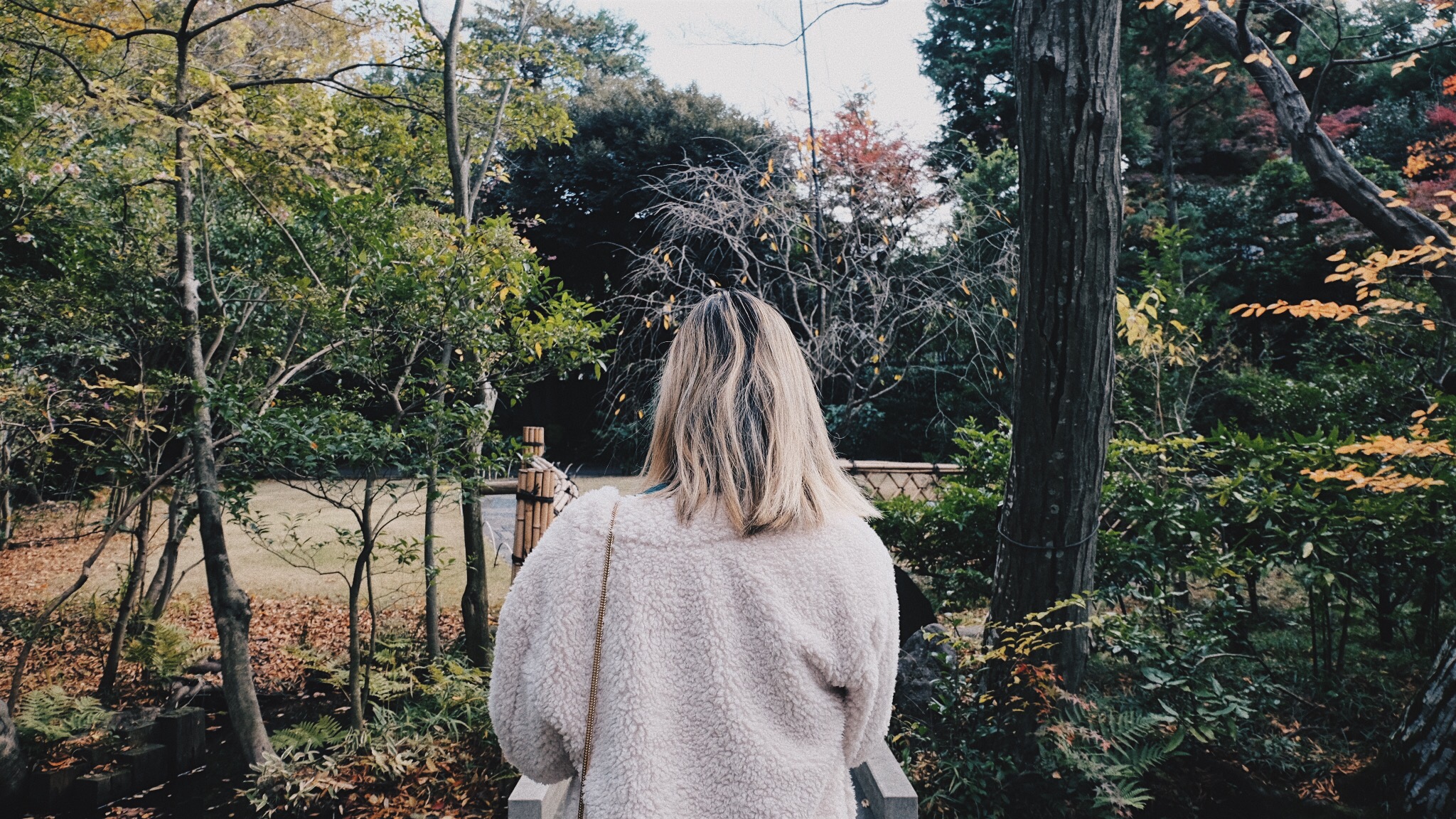 A stroll in the garden

We were immersed in nature; the sounds of running water, birds chirping and all sorts of trees and plants around you. We missed out on a lot of gardens in Japan due to bad weather. I’m glad we were able to experience this one.

It was time for a coffee break and there was an abundance of cafes around us. I had to stop by Cafe Kitsune, since I’m a big fan of the brand AND I also wore my shirt for this occasion.

Drinking an espresso at Cafe Kitsune.

The next spot was Aoyama Flower Market Tea House. We couldn’t leave the neighborhood without trying this. My sister told us about a tea house behind a flower shop and we pretty hyped to try a “speakeasy” tea house. It was more apparent than I thought it was. They had signs and there was quite a long line.

Jacqueline ordered hot lemonade and I got rose soda. We shared French toast which was kinda mediocre.

The overall ambiance was nice, it felt like we were eating in a greenhouse.

We went to Akihabara afterwards to do some souvenir shopping. It was a good spot since there were tons of shops that sold anime stuff and almost every store had gachapon machines too. We both have friends that are into anime so it was a perfect area. The best spot we went to was the Akihabara Gachapon Hall. This one store had the most machines out of all the places we been to and they had the ones we were looking for.

After a few hours of souvenir shopping it was time for an early dinner reservation I made at Manten Sushi. Unfortunately There was some logistic error and my reservation wasn’t in their system. They let us eat anyway since I had the confirmation email. The only exception was that we only had half a hour to eat instead of a hour and a half. That was fine by me as long as we got to eat there.

We have been waiting to try good sushi in Japan. Most of the popular spots needed a reservation months in advance. I got lucky with Manten Sushi since I made my reservations two weeks before the trip.

It was an Omakase restaurant which means that you don’t order and the chef basically has a menu that he/she is preparing for the night.

Omakase is the Japanese tradition of letting the chef choose your order. The word means “I will leave it to you”. It’s a tradition that gives the chef creative freedom and the customer a memorable dining experience.

Dish after dish, they were all amazing. I was able to take a couple of pictures, but ultimately we tried to take in the experience as much as we can.

There were a couple of unique pieces we ate like octopus with yuzu and sardines with soy sauce(?). We were also served Miso Soup with baby clams which made it a very heavy soup. I normally love miso soup, but this was just too much for me.

The Spanish mackerel and the uni were my favorite pieces aside from the salmon, salmon belly and tuna but those are common.

It was a great way to end our day. I highly recommend Manten Sushi (まんてん鮨). For around ~$60 per person, you get quality omakase which can easily be $150 per person in New York. Next time I’m back in Japan I need to try Jiro or Saito.